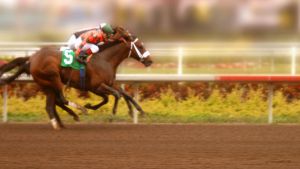 departments, including Oceanside PD, patrolled the racetrack area from 3 p.m. to midnight. Police patrols stopped a total of 349 vehicles, a large number given the small area they were working in.

Police arrested a total of 15 people on suspicion of driving while under the influence of alcohol. In addition to these 15 arrests, 2 more individuals were arrested on suspicion of drug possession and 4 other for driving with a suspended license. In addition to these 21 arrests, 35 traffic citations were issued during the course of the patrols. Traffic citations include parking tickets, illegal u-turns, speeding, running a stop sign or red light, and many more. These citations are payed with a fine or traffic school in some situations. Police totaled 56 arrests and citations during the course of the nine hour period.

One of the 15 arrested on suspicion of DUI (driving while under the influence) was Mike Smith a Hall Of Fame Jockey. Mr. Smith blood alcohol level content (BAC) was not released by police and is still questionable. We know that Mr. Smith drank three glasses of wine before getting in his car and driving home. He was arrested on the 13900 block of Via Abertura in Carmel Valley around midnight, about 5.5 miles away from the racegrounds. Mr. Smith stated that he blew a little over however he was not speeding or driving recklessly, he was just going home after a good day at work. Police stated that they pulled him over because he was slightly weaving between lanes at a very slow speed.